This page contains recommendations for writing personal names and for capitalizing in French, German, Italian, and Spanish. If you need information on romanizing from languages that do not use the Latin alphabet, such as Russian or Chinese, consult the MLA Style Manual and Guide to Scholarly Publishing (3rd ed.; New York: MLA, 2008; print; 3.6-7, 3.11)

All of the following samples are taken from:

For information on citation support for languages in Zotero, please see the following help pages:

Please note that there are multiple language configuration menus in Zotero. To prevent title casing of citations written in non-English languages, add the language code to the "Language" field in the Zotero record, as in link #2 above. To change the formatting of the citations themselves (e.g., translating terms such as "volume" into another language, changing the punctuation, etc.), check to make sure the language is supported in the list of languages in link #3 above, then select the language from the Zotero Document Preferences as in the below image (accessed when insert a citation into a document using the Zotero word processor plugin), if it is available for the citation style you are using. For additional help, please consult a librarian. 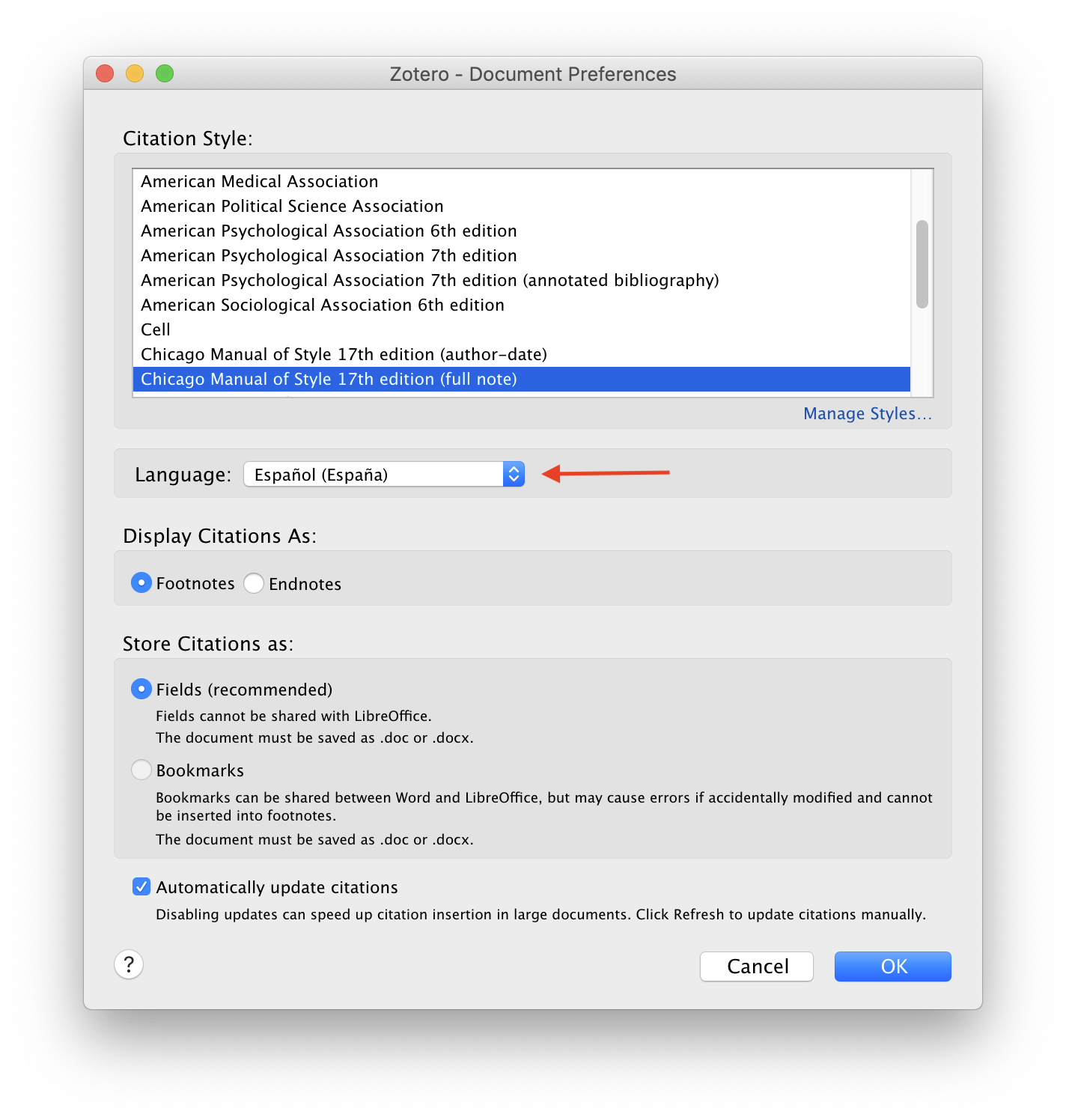 With some exceptions, especially in English-language contexts, French de following a first name or title such as Mme or duc is not used with the name alone.

However, when the last name has only one syllable, de is usually retained.

The preposition also remains, in the form of d', when it elides with the last name also beginning with a vowel.

The forms du and des- combinations of de with le and les- are always used with last names and are capitalized.

A hyphen is frequently used between French given names, as well as between their initials (Marie-Joseph Chénier, M.-J. Chénier) Note that M. and P. before names may be abbreviations for Monsieur 'Mr.' and Père 'Father' (M. René Char, P.J. Reynard)

In prose and verse, French capitalization is the same as English except that the following terms are not capitalized in French unless they begin sentences or, sometimes, lines of verse.

3. The names of languages

In the other method, when a title or subtitle begins with an article, the first noun and any preceding adjectives are also capitalized. In this system, all major words in titles of series and periodicals are sometimes capitalized.

Whichever practice you choose or your instructor requires, follow it consistently throughout your paper.

German von is generally not used with the last name alone, but there are some exceptions, especially in English-language contexts, where the von is firmly established by convention.

In alphabetizing a German name with an umlaut (the mark over the vowel in ä, ö, and ü), Germanists treat the umlauted vowel as if it were followed by an e; thus, Götz would be alphabetized as Goetz and would precede Gott in an alphabetical listing. Nonspecialists, however, and many libraries in English-speaking countries alphabetize such names without regard to the umlaut; in this practice, Götz would be alphabetized as Gotz and would therefore follow Gott in an alphabetical listing. Whichever practice you choose or your instructor requres, follow it consistently throughout your paper.

In prose and verse, German capitalization differs considerably from English. Always capitalized in German are all nouns- including adjectives, infinitives, pronouns, prepositions, and other parts of speech used as nouns-as well as the pronoun Sie 'you' and its posessive, Ihr 'your,' and their inflected forms.

Generally not capitalized are

1. The subject pronoun ich 'I'

2. The names of languages and days of the week used as adjectives, adverbs, or complements of prepositions

In letters and ceremonial writings, the pronouns du and ihr, 'you' and their derivatives are capitalized. In a title or subtitle, capitalize the first word and all words normally capitalized.

The names of many Italians who have lived before or during the Renaissance are alphabetized by first name.

The names of members of historic families are also usually alphabetized by last name.

In prose and verse, Italian capitalization is the same as English, except that in Italian centuries and other large divisions of time are capitalized (il Seicento) and the following terms are not capitalized, unless the begin sentences or, usually, lines of verse:

3. The names of languages and nationalities

6. The words meaning "street," "square," and so on, in most place-names

In a title or subtitle, capitalize only the first word and all words normally capitalized.

Spanish de is not used before the last name alone.

Spanish del, formed from the fusion of the preposition de and the definite article el, is capitalized and used with the last name alone.

A Spanish surname may include both the paternal name and the maternal name, with or without the conjugation y. The surname of a married woman usually includes her paternal surname and her husband's paternal surname, connected by de. Alphabetize Spanish names by the full surnames (consult your sources or a biographical dictionary for guidance in distinguishing surnames and given names).

Even persons commonly known by the maternal portions of their surname, such as Galdos and Lorca, should be alphabetized by their full surnames.

In prose and verse, Spanish capitalization is the same as English except that the following terms are not capitalized in Spanish unless they begin sentences, or, sometimes, lines of verse:

3. The names of languages and nationalities

6. The words meaning "street," "square," and so on, in most place-names

Note: In a title or a subtitle, capitalize only the first words and words normally capitalized.

Some instructors follow other rules. In the titles of series and periodicals, they capitalize all major words