Skip to main content
It looks like you're using Internet Explorer 11 or older. This website works best with modern browsers such as the latest versions of Chrome, Firefox, Safari, and Edge. If you continue with this browser, you may see unexpected results.

Dickinson College students, staff, and faculty are invited to join us for a community discussion of Sigh,Gone by Phuc Tran.

Participants will read the book prior to the start of the Spring 2021 semester.  We'll then come together online on Monday, January 25, 2021 from 5:00 until 6:30 p.m. for small group conversations facilitated by Dickinson faculty and staff.

Please register to let us know that you plan to attend. This will allow us to determine the number of discussion facilitators necessary to make it a meaningful event in which all attendees can participate.

About the Spring into the Semester Community Reading Program

The community reading program is designed to provide shared intellectual experiences, build community, and encourage dialogue and discussion on a timely issue. It is an opportunity for the Dickinson community to come together at the beginning of the spring semester, when there are few broad community-centered programs already scheduled.

This event is sponsored by the Dickinson College Division of Academic Affairs, Human Resource Services, Division of Student Life, Office of Institutional Effectiveness, and the Waidner-Spahr Library.

In Sigh, Gone, Phuc Tran describes violent incidents that he experienced. Some readers may feel triggered by this material.

This self-care checklist for dealing with trauma triggers in the media may also be useful in a non-emergency situation.

In the case of an urgent need, please refer to these Emergency Resources. 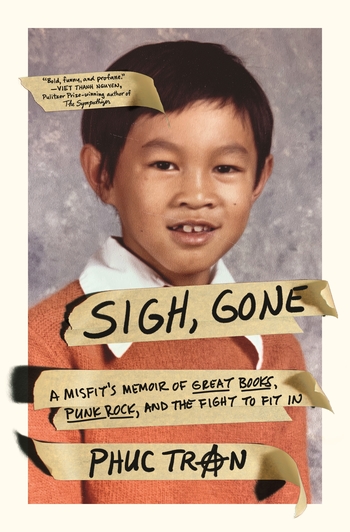 Sigh, Gone is a coming-of-age account of Tran’s life as a Vietnamese immigrant whose family fled their home country as a result of the Vietnam War. By sheer chance they land in Carlisle, PA, where the Trans struggle to assimilate into their new life. In this coming-of-age memoir told through the themes of Western classics such as The Metamorphosis, The Scarlet Letter, and The Iliad, Tran navigates the push and pull of finding and accepting himself despite the challenges of immigration, feelings of isolation, and teenage rebellion, all while attempting to meet the rigid expectations set by his parents.

Appealing to fans of coming-of-age memoirs such as Fresh Off the Boat, Running with Scissors, or tales of assimilation like Viet Thanh Nguyen's The Displaced and The Refugees, Sigh, Gone explores one man’s bewildering experiences of abuse, racism, and tragedy and reveals redemption and connection in books and punk rock. Against the hairspray-and-synthesizer backdrop of the ‘80s, he finds solace and kinship in the wisdom of classic literature, and in the subculture of punk rock, he finds affirmation and echoes of his disaffection. In his journey for self-discovery Tran ultimately finds refuge and inspiration in the art that shapes—and ultimately saves—him. Curbside pick-up and shipping are available.  See the Whistlestop website for details.